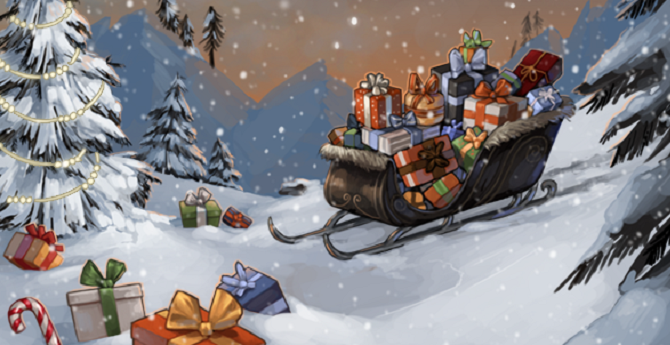 The player will need

(stars) to open presents. One way to earn them is by doing quests for Frosty. The player will also get 10 stars for pressing the "Start" button, and the player can also find stars hidden in some presents.

To access the presents window, click the Winter Event Button at the left side of the screen (pictured to the left). Every day there will be a new set of rewards hidden in the presents. The player uses stars to open them to claim what is hidden inside. The player can open as many presents as it can afford and win everything over and over again.

There are also special awards hidden among the presents. "Show 2" reveals two random presents on the board and gives the player 3 stars, "Double Payout" doubles the reward in the next present to be opened, and "Shuffle All" resets all the presents. When "Shuffle All" appears, the player needs to press "Start" again and in addition claim 10 new stars.

Every day throughout the event Frosty presents a new quest to be solved. Every solved quest grants the player with an amount of stars. The quests don't need to be solved the same day but they have to be solved in the order they are presented.

Notes:
1 20 population, 20 happiness, 200 coins, 200 supplies, and 5 goods.
2 Only stars were awarded if player already owned the Frosty portrait.
3 Only one of these quests was presented depending on which building the player possessed at the time and the one quest the player got could only be completed once.

This is a list of available prizes during the event. They can either be won in presents the same day or, in those cases they are special buildings, be bought the following day for 2,000 diamonds.

Notes:
4 Amount was depending of the player's researched age.