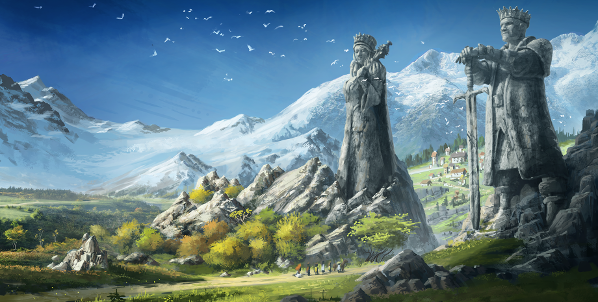 Can you believe that Forge of Empires is celebrating its 5th anniversary this year?

We went through many ups and downs and achieved numerous milestones since 2012. We would like to thank you for playing Forge of Empires and for supporting us during the last five years. We'd also like to extend our special thanks to all of the regular forum members who constantly provide us with feedback, as well as supporters and moderators, who helped make the community what it is today.

To celebrate our 5th birthday, Madame Fortuna, who made her first appearance during Forge of Empires's 1st anniversary, returns. She'll take you on a short sentimental ride through the history of Forge of Empires. At the end of her small questline, you will be rewarded with new, more majestic versions of the Queen and the King buildings. They make up a new set with a third building, that will be automatically placed in your inventory soon.

There are upgraded versions of The King and The Queen which are obtainable as the final reward for completing Madame Fortuna's quests. The third building will automatically be added to the player's inventory on the 24th.

Note: You DO NOT need to possess The King and The Queen in order to receive the King Statue and Queen Statue.

The three buildings are:

The questline is presented by Madame Fortuna, as in the previous birthday event.

Quest 3: Glimpse Into the Far Future

Quest 6: A Place for Friends

Quest 7: A Quest For More