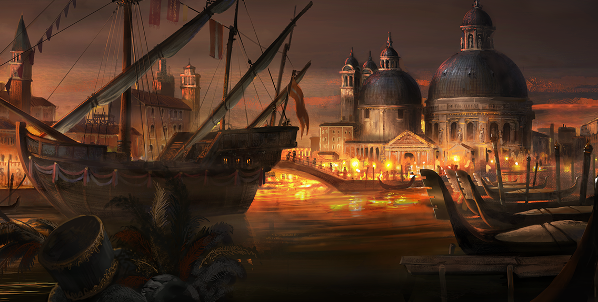 "Gain Carnival Tickets from quests and over time.
Use them to play in the gaming alley.
Win Florins, if you're lucky.
Use Florins to get fantastic Venice-themed prizes!"[1]​

This time the quests are presented by two quest-givers, the Casanova and the Doge of Venice.

The quests of the main questline occur immediately with no timed delay. There are 20 of such quests.

The quests of the Daily Questline will occur once a day, with a time interval of 24 hours between them. In case the player is unable to finish the quest the day it occurs, it will stack and the player will be able to complete all of the quests till that date at one time.

Most of the action takes place in the event window. You're playing games in gaming alley by spending your

Tickets. You decide which game you want to play. Each game costs only one

Ticket to play, and don't worry if you run out, the Carnival provides a new free

Ticket every hour! Enter the event window and select any of the three games to play: 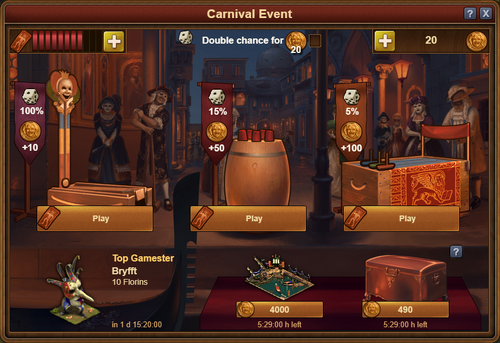 You can spend your

Ticket on a certain win, and you will always get something in return. However, you can also take a risk and try your luck in one of the other games, where chances to win are lower, but the potential gain is much greater.

Every time you lose, the pool of

Florins rises for that particular option. The first person lucky enough to win, will take all the

Florins that have accumulated in the meantime. While winning the first game is not much of an achievement (you will always win a small sum of

Florins), it is a bit more difficult for the second and third game. If you have enough luck to be successful, you will win the entire

Florins pool that has accumulated for this particular game.

And if you are the person that got the best result in a single attempt, you will become the "Top Gamester" and you will have a chance of getting a unique Mask Statue for your city. The mask is granted every three days, so make sure to keep an eye on the game and use your Tickets when the potential payout is high!

There are four different kinds of prizes that you can get during the Carnival Event:

The whole neighborhood is competing for the same

Florins, and every 3 days the top player that has been rewarded the highest amount of

Florins with one sole

The mechanics of the event are mostly similar to last year's. However Roses and Hearts have been replaced by

Both Tickets as well as Florins can be bought with diamonds. The respective rates are listed below:

Ticket has a unit price of

Daily Chests
Two chests were offered per day, one every twelve hours.[2] They can be opened for a number of florins. Each chest contains a prize to be awarded to the player. The prize awarded is selected at random, and has a predetermined probability.[3]

This table is information pertaining to the first chest of each day.

This table contains the information regarding the second chest of each day.

This is a list of the rotating prizes during the event. They are available for 6 hours once they appear. One was able to purchase the prize for a given amount of florins.