Welcome to the Great FoE Bake Off!
Get ingredients from Quests, Daily Challenges and Incidents.
Use them to bake Recipes.
Fill the whole table and get awesome rewards!​

This year, we return to the tent ready to avoid soggy bottoms and burnt icing, as you bake your way to glory. In a competition where you need to first collect all the ingredients required, before baking as many recipes as possible! With great prizes to be won, with each bake! 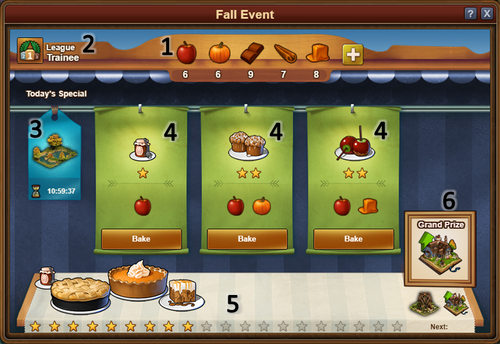 The Main Questline starts out normally before splitting the events into two parallel questlines. When this happens you will see two quests that can be completed, you may choose to complete one set of quests first before completing the other set (this way you will end up with just one quest listed to complete once you have completed the other set of quests), or complete one from each list in turn. Which ever way you complete the Main Questline, you must complete all of them before you can start on the Daily Questline. No quests are abortable.

Note: Where the word "some" appears in the quest text below, the amount differs depending on the Age the player is at. The Lower Numbers in brackets are for BA. The second number in brackets is for the ME unless stated otherwise[AGE].

Ms Appleton: "Defeat this medium-sized army OR Solve this moderate negotiation" and "Gather some (20 - 160[VF]) goods e.g. from goods buildings or by trading"
Reward:

This is the list of Daily Specials, they can be won from all recipes on the same day.

You can find a list of Daily Specials as they appeared on Beta here.

Retrieved from "https://forgeofempires.fandom.com/wiki/2019_Fall_Event?oldid=138899"
Community content is available under CC-BY-SA unless otherwise noted.