Get ingredients from Quests, Daily Challenges and Incidents.
Use them to bake Recipes.
Fill the whole table and get awesome rewards!​

This year, we return to the tent ready to avoid more soggy bottoms and burnt icing, as you bake your way to glory. In a competition where you need to first collect all the ingredients required, before baking as many recipes as possible! With great prizes to be won, with each bake! 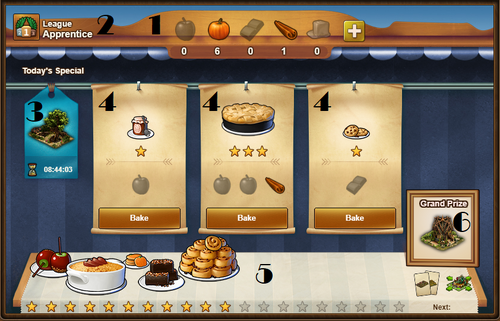 The player may be expected to receive the following amount of

Ingredients if they complete the entire event and login at least once a day.

The breakdown by ingredient is:

The Main Questline starts out normally before splitting the events into two parallel questlines. When this happens you will see two quests that can be completed, you may choose to complete one set of quests first before completing the other set (this way you will end up with just one quest listed to complete once you have completed the other set of quests), or complete one from each list in turn. Which ever way you complete the Main Questline, you must complete all of them before you can start on the Daily Questline. No quests are abortable.

Note: Where the word "some" appears in the quest text below, the amount differs depending on the Age the player is at. The Lower Numbers in brackets are for BA. The second number in brackets is for the SAV.
To get a better idea of your exact requirements Click Here and use the Tables provided, please be aware that the Final Table is incomplete as we do have players from those Ages that could help.

2 Chocolate and an Event Surprise Box

Ms Appleton: "Defeat this medium-sized army OR Solve this complex negotiations" and "Gather some (20 - 240) goods e.g. from goods buildings or by trading"
Reward:

Ms Appleton: "Exchange 5 items in the Antiques Dealer building OR Gather some (50 - 600) goods, e.g. From goods buildings or by trading"
Reward:

Ms Appleton: "Solve 7 encounters in the Guild Expeditions OR Acquire some (2 - 4) sectors"
Reward:

Ms Appleton: "Exchange 4 items in the Antiques Dealer building OR In a production building, finish a 4-hour production some (4 - 24) times"
Reward:

Ms Appleton: "Solve this moderate negotiation OR Defeat this medium-sized army" and "In a production building, finish a 15-minute production some (3 - 18) times"
Reward:

2 Chocolate and a portrait of Finn

Each bake you make will give you a reward, listed below are all the prizes that can be obtained during this Event. Each type of recipe will give you either a Daily Special or one of the associated prizes. Every time you fill the Table with 20 star rated Recipes you get a Grand Prize. 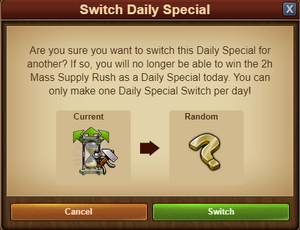 This one will then be your Daily special for the remainder of the time (You may not revert back to the original one if you find this one less desirable).