Join Queen Nefertiti in the glory of the 18th Egyptian Dynasty.
Help her establish a city on the banks of the Nile and defend it from her enemies!

Ancient Egypt is the third of the Cultural settlements, introduced to the game on 18 March 2020. Construct Ancient Egypt Settlement buildings and gain their resources to unlock embassy advancements. Finish the settlement by completing all quests to gain unique settlement rewards.

This page explains the workings of the quests, embassy advancements and rewards, for information about the settlement and its buildings check the Ancient Egypt Settlement page.

Finish all 23 quests presented by Nefertiti to finish the Ancient Egypt Settlement. The quest rewards consist of items for the player's main city, like coins, supplies, Forge Points and Self Aid Kits. Also, there are rewards for the Egyptian Settlement like Egyptian units and Impediment Removal Items.

Nefertiti: "Have 2 Luxury Estates" and "Have 1 Oasis"
Reward: small 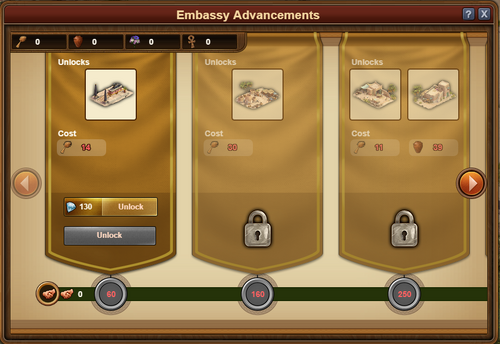 10 barley in stock and

40 diplomacy in their city, missing

30 diamonds to unlock the advancement, plus the

10 barley in stock.
The amount of diamonds shown below is the maximum diamond cost for each advancement, when no goods or diplomacy would be used at all. The total cost of all advancements would then be

Cultural goods buildings provide a production bonus. In the first settlement, with each production the player has a chance of 5% to get 4x the amount of goods produced or loot gained from battles. With each finished settlement this percentage will increase by 2%, until 10 settlements are finished, after which it stays at 25%.

Each finished Ancient Egypt Settlement will provide a different reward for use in your main city. Collect them all to get the strongest buildings, emissaries and their respective portraits.

When finishing the Ancient Egypt Settlement within a certain time frame, the player will get an additional reward: fragments of the Ancient Obelisk Selection Kit.