The Ancient Egypt Settlement is the third of the Cultural Settlements, released on 18 March 2020. The purpose is to help Queen Nefertiti lead Ancient Egypt to prosperity.

This page explains the workings of the settlement and its buildings; for information about the quests, embassy advancements and rewards check the Ancient Egypt page.

9,000 Deben Coins. Take notice of the impediments on the city grid, unmovable rocks that block part of the grid. Normally these cannot be removed; however with this settlement they've made it possible to remove some. You can't remove all of them, so it may still be necessary to build around the impediments, making it harder to arrange buildings. However keep in mind that every expansion apart from the main city grid will always have one impediment on it. 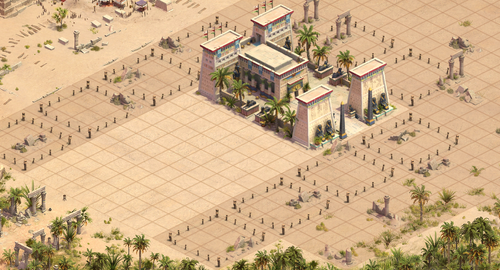 The Ancient Egypt embassy has a size of

6x8 and can be moved to another location on the grid. The embassy cannot be sold. 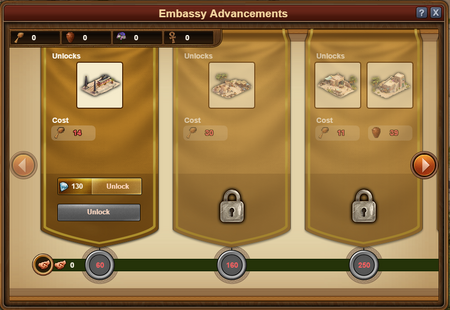 A list of all embassy advancements and their requirements can be found on the Ancient Egypt page.

The building menu consists of five types of buildings and an expansions window:

At the start of the settlement, the player will have one of each type of building available in the building menu, except for Military Buildings that will have three buildings available: The Simple Clay Hut, the Grain Farm, the Potted Plant, the Training Camp, the Nubian Archery Range, the Camel Barn and the Path in the Sand. All other buildings become available by unlocking embassy advancements.

The building cost of each settlement building depends on the player's era and consists of resources from the main city, i.e., coins and supplies.

Deben Coins. Deben Coins are needed for the recruitment of Egyptian military units and for building roads in the settlement.

Beware: When finishing or abandoning a settlement, all

Deben Coins in stock will be lost.

Cultural goods buildings provide an amount of cultural goods, from 5 to 20, depending on the chosen production time. The production is similar to goods production in the main city, but requires a resource that the player gets by winning battles in the settlement,

Cultural goods buildings provide a production bonus: with each production the player has a chance of 5% to get 4x the amount of goods produced. With each finished settlement, this percentage increases by 2%, until 10 settlements are finished, after which it stays at 25%.

Beware: When finishing or abandoning a settlement, all cultural goods in stock will be lost.

Diplomacy buildings provide diplomacy, some of them also produce

Deben Coins. Diplomacy is needed to unlock embassy advancements. Although diplomacy seems similar to happiness, it has no effect on the

Egyptian population or on settlement productions.

The buildings that produce Deben Coins have 6 different production options.

Beware: When finishing or abandoning a settlement, all diplomacy gained will be lost.

Loot that is needed to start production of cultural goods.

The first 2 training spots in the Military buildings are unlocked for free. The remaining 3 have to be unlocked for

The player will be offered 3 fights per day with different difficulties - one easy, one normal and one hard.

Loot in battles as when harvesting a cultural goods building.

Military bonuses in the player's main city will have no effect on the Egyptian battles.

Each battle difficulty has a random amount of loot allotted. The amounts may be selected from the following ranges:

The Ancient Egypt Settlement is the first settlement where the roads require the cultural currency. To compensate the embassy provides a daily collection of

To expand the settlement, the player can buy 20 expansions with cultural goods. The cost of an expansion is one of the four options shown below. Example: to place the 9th expansion the player can choose between paying

Warning: Before using diamonds, be aware that when finishing a settlement (or abandoning one), the settlement will be reset and all buildings, goods in stock, advancements and expansions will be lost, including those unlocked with diamonds.

Ancient Egypt is the first settlement to introduce the impediment removal tools. 6

free removal tools can be gained from solving quests in the settlement. Additionally, 6 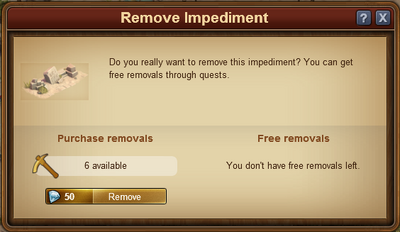