The Aztec Settlement is the fourth of the Cultural settlements, released on November 9th 2020. The purpose is to lead the Aztecs to prosperity.

You need to have researched the Colonial Age technology Colonies to unlock it.

This page explains the workings of the settlement and its buildings; for information about the quests, embassy advancements and rewards check the Aztecs page.

When starting the Aztec Settlement the player will have a city grid the size of 6 expansions (3x2), with the Aztec embassy in the top corner, and a stock of

5000 Cocoa Beans. Take notice of the impediments on the city grid outside of the starting area - unmovable rocks that block part of the grid. These can be removed, using removal tools as far as they are available - otherwise it is necessary to build around the impediments, making it harder to arrange buildings. 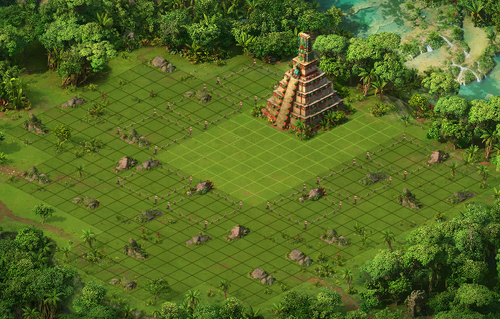 The Aztec embassy has a size of

5x5 and can be moved to another location on the grid. The embassy cannot be sold. 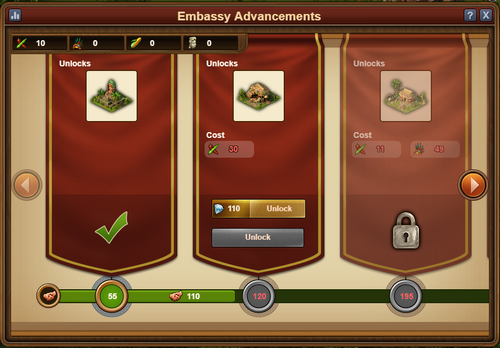 A list of all embassy advancements and their requirements can be found on the Aztecs page.

At the start of the settlement, the player will have one of each type of building available in the building menu: The Macehualtin Hut, the Vegetable Garden, the Honoring Sculpture and the Simple Path. All other buildings become available by unlocking embassy advancements.

Residential buildings provide Aztec population and Cocoa Beans. Cocoa Beans are needed for the production of cultural goods. The Macehualtin Hut has three possible designs and the Yaoteguihua Residence has two possible designs of which the game selects one randomly upon placement of the building - the other options can be seen in the Gallery.

Beware: when finishing or abandoning a settlement, all population and Cocoa Beans in stock will be lost.

Cultural goods buildings provide an amount of cultural goods, from 5 to 20, depending on the chosen production time. The production is similar to goods production in the main city, but requires a resource that the player gathers in the settlement: Cocoa Beans.
Cultural goods are used for unlocking embassy advancements and expansions.

Cultural goods buildings provide a production bonus: with each production the player has a chance of 5% to get 4x the amount of goods produced. With each finished settlement, this percentage increases by either 1 or 2%, until 13 settlements are finished, after which it stays at 25%.

Three minigames are available per day. Each one will show you how many cultural goods you can possibly get as a reward. The amount of goods that can be won per minigame is a random amount between 9-12. For example it will say 0-12, which means there will be exactly 12 goods available to find, but you might not succeed in getting all of them with only the free turns. Each game will reward only one of the four types of goods. Which type for each game is random.

The minigame works basically like the classic game Minesweeper, but hitting the mines (hidden goods) is the goal.

You will start with a fully covered board of seven by eleven tiles (77 total) and 1 more free turn than the available amount of goods in the minigame. Clicking any of the covered tiles consumes a turn and reveals either:

Finally, when you run out of turns, you will have three options:

When finishing a minigame all unused turns will expire and will not transfer to any other minigame.

At the end of the first 3 minigames, after you collect the reward, the minigame will reveal all its tiles.

Diplomacy buildings provide diplomacy, some of them also produce Cocoa Beans. Diplomacy is needed to unlock embassy advancements. Although diplomacy seems similar to happiness, it has no effect on the Aztec population or on settlement productions. The Honoring Sculpture and the two Statues each have three possible designs of which the game selects one randomly upon placement of the building - the other options can be seen in the Gallery.

The buildings that produce Cocoa Beans have 6 different production options, in the following table all productions are listed.

All settlement buildings except the non-production diplomacy buildings require a road connection to the embassy.

To expand the settlement, the player can buy 17 expansions with cultural goods. The cost of an expansion is one of the four options shown below. Example: to place the 6th expansion the player can choose between paying

The Aztecs are the second settlement to use the impediment removal tools. 5

free removal tools can be gained from solving quests in the settlement. Additionally, 5 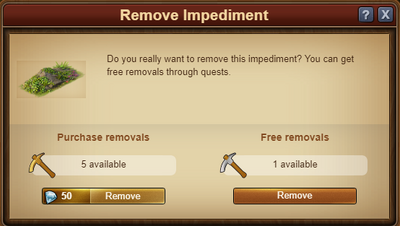