The Castle System is a feature that rewards a player for activity and is accessed through a building placed on a cliff in the wilderness outside of the city. The feature is available to everyone after finishing the initial game tutorial. It was released on the German server for expanded testing in a live setting on August 9th 2021. It was released to the other live servers on October 13th 2021. On February 22nd 2022 5 new levels was added.

In the Castle System you progress by earning

Castle Points in the most varied ways and thus leveling up your castle from level 1 to 20. The visual appearance will change when level 1, 4, 7, 11, 15, 17 and 20 are reached. If a player does not want others to see their progress the visualization can be deactivated via the game options at any time so that the default version is displayed in the city (level 0).

Note that the progress of your Castle System is world-based! 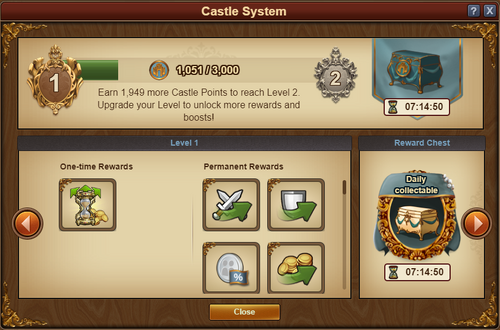 The above screen contains the following elements:

Castle Points can be received in the ways listed in the following table. Please note that even though the Castle System is available after finishing the initial game tutorial some methods of earning Castle Points will not be possible until other features are unlocked by research at different times later in the game.

The required points for each level is shown in the table below. When you level up you keep your points from previous levels meaning you do not have to start from zero each time.

The castle system allows the player to collect a Daily Reward Chest. Advancing on the Castle levels will award the player a better daily chest with more

These rewards are given out once and sent directly to the player inventory after reaching the required level. You can get shrink-kits, buildings, portraits, rush-items, emissary slots and expansions.

Although Portraits and Emissary Slots are shown in-game as One-Time Rewards they are kept permanently on the Profile and Emissary tabs of the Town Hall respectively.

The list of one-time rewards on each castle level is shown in the table below.

Permanent rewards are activated and received from the moment you reach the required level. Some of the rewards are boosts like coin, supplies and army (attack/defense) boosts which the player based is already familiar with in event buildings for example. On top of that, you can also grab some nice new Castle System exclusive boosts, including Antiques Dealer, Continent Map and Friend's Tavern boosts. These either reduce costs or time or increase what you get from a collection. All boosts and respective descriptions are listed in the table below.

Awarded permanent boosts per level shown in the table below:

1/8
Community content is available under CC-BY-SA unless otherwise noted.
Advertisement