This page offers general information about Cultural Settlements, more detailed information can be found on the settlement pages.

Cultural Settlements are unlocked with the Iron Age technology Plowing. After unlocking it, the player will find the harbor ruin to the north of the city changed to an intact harbor and a boat will appear in that harbor. The boat and the harbor will bring the player to their new settlement. The boat displayed after the settlement was started will be different for each culture. 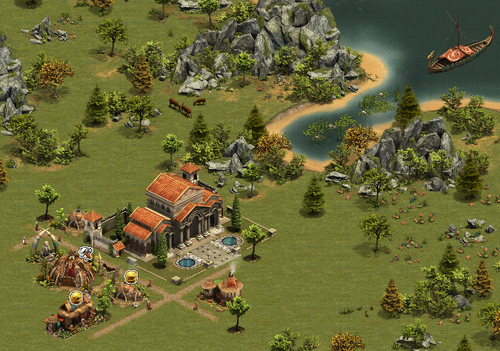 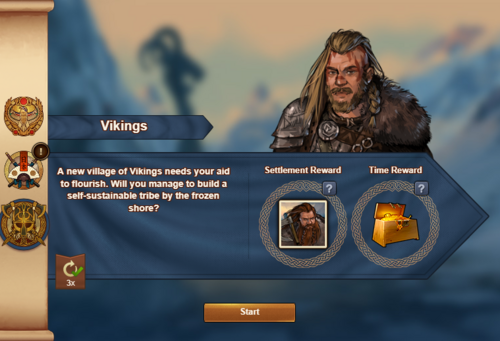 Start the settlement and set sail to a completely new map to build up a settlement as the new ruler!

Each settlement can be abandoned at any point. Abandoning a settlement will not change the existing Impediments nor will it change the prices in certain goods for the Embassy advancements.

If you abandon the settlement without completing any quests there will be no waiting time to start the next one. If you have completed at least one quest the waiting time will be 24H.

Be careful though, whenever a settlement is completed or abandoned, all resources, advancements, buildings and expansions (including the premium ones), are reset again!

Building up a settlement is not as easy as one may think, as impediments, unmovable rocks in the settlement, block part of the city grid, making it harder to arrange buildings, since buildings need to be placed around the impediments. Also, to gather resources, large amounts of cultural coins are needed, making it even more important to use the given space as efficient as possible. 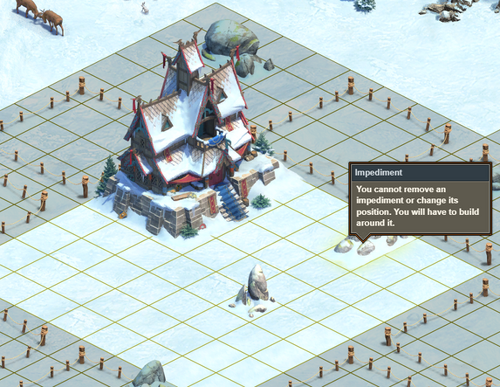 Some of the settlements, like Ancient Egypt, Aztecs and the Mughal Empire include the option to remove impediment. Impediment removal tools may be given as quest rewards or bought for

The embassy gives access to the embassy advancements and shows the player's stock of cultural goods. The embassy can be moved to another location on the city grid, but cannot be sold. Click on the embassy (or the 'Develop' button) to open the 'Embassy Advancements' window. 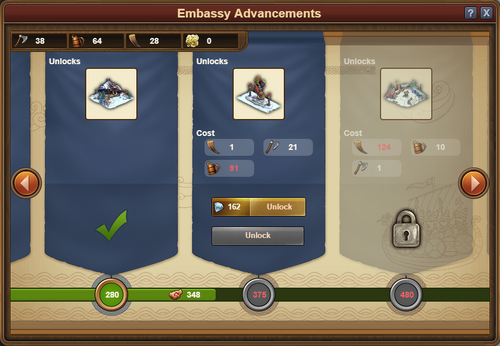 7 axes in stock and

50 diplomacy in their city, missing

20 diamonds to unlock the advancement, plus the

At the start of the settlement, the player will have one of each type of building available in the building menu. All other buildings become available by unlocking embassy advancements.

Military buildings in the building menu with three buildings available from the start.

Cultural goods buildings provide an amount of cultural goods, from 5 to 20, depending on the chosen production time. The production is similar to goods production in the main city, but requires a resource that the player gathers in the settlement: viking copper coins, japanese koban coins, egyptian loot, aztecs cocoa or mughal rupees. Except for Ancient Egypt where Loot is won in Egyptian battles, the others are produced in residential buildings and certain diplomacy buildings of the respective settlement.

Every settlement has a certain chance for goods productions to quadrupel (x4). This chance starts low and increases with every run of the settlement until it stays constant. This bonus chance also applies to the goods won in the japanese negotiation game, or the loot won in egypts battles or the mughals embassy production.

Diplomacy buildings provide diplomacy and some of them also produce cultural currency. Diplomacy is needed to gain the trust of the settlement and unlock embassy advancements. Although diplomacy seems similar to happiness, it has no effect on the settlement population or on settlement productions.

There is also a number of expansions that can be unlocked with diamonds. These cost

The number of expansions that can be bought with cultural goods or diamonds may vary between the cultures.

Open your cities Town Hall to enter the emissaries window. Here you can add and change emissaries to gain their boosts and unlock additional emissary slots, using

There are 6 Emissaries in total available in the Vikings Cultural Settlement.

There are 4 Emissaries in total available in the Feudal Japan Cultural Settlement.

There are 4 Emissaries in total available in the Ancient Egypt Cultural Settlement.

There are 4 Emissaries in total available in the Aztecs Cultural Settlement.

There are 4 Emissaries in total available in the Mughal Empire Cultural Settlement.

The Harbor to access the settlements changes it's appearance through the ages: