Forge of Empires Wiki
Register
Don't have an account?
Sign In
Advertisement
in: Quests, The Illusionist, The Nameless, Game

Daily Challenges are a feature introduced on 11th December 2017, later on 12th January 2022 revamped to the current version, available after the player researches the early Iron Age tech Militia. Every 24 hours, at a given time, The Illusionist will present you with a new challenge. A challenge not accepted or not completed from the previous day or a reward not collected will be lost at the point the new challenge is presented.

When the Daily Challenges are first unlocked on a world, the time for the reset of the daily challenge is set to 8 AM server time. The player however can freely select the starting time of the challenge by clicking on the cogwheel button near the timer. After resetting the starting time the next challenge will be presented at the earliest 24 hours after the last challenge started [1].

The Illusionist will present the player with the choice between two reward chests together with an option of switching todays reward for a choice of tomorrows rewards. It costs

300 Diamonds, but you get to see what the choice of rewards are before you decide if it is worth to pay, these also appear the next day.

The reward chests are chosen randomly from all available chests and do not depend on your age or other factors. Moreover, they are different for each player. They will reward you with in-game resources, special Military Units (such as Champions and Rogues), military buildings, Boost Crates, special buildings, even parts of event sets and 100

After the chest is selected, two to seven randomly selected tasks are presented that need to be completed to win the selected chest. The tasks will never be impossible to be fulfilled at the time of the presentation of the tasks. Also, the tasks are mainly independent of the chosen chest. It is possible to switch out tasks in the Daily Challenge. The first task per Daily Challenge you switch out is free and then it costs

25 Diamonds per switch. Exchanged task will not appear again on the same day. There exists a limit on how many times you can switch out a specific task, and it appears to be 16 times. 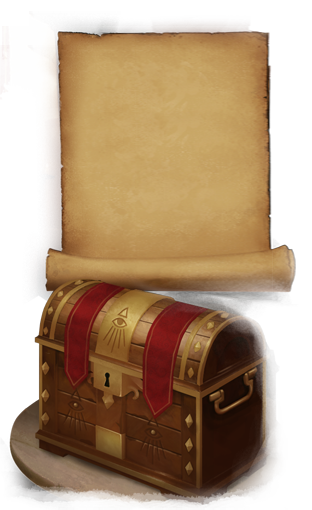 After completing seven Daily Challenges and therefore completely filling up the progress bar, The Illusionist will reward you with a Challenger's Chest together with 700

Castle Points and the progress bar will reset[3].

These are the types of chests that can be offered by the Illusionist.

The Illusionist gives you 2-7 tasks. You have until next day, 8AM server time or your own starting time, to complete them to win the chest.

These tasks depend on your city's age:

These tasks depend on your city's age:

These tasks are oriented towards Campaign Map.

While having no unconquered sector and scouting the next province requires more than 24 hours, these tasks will not be offered in Daily Challenges.

For tips and tricks, see Quest Tips and Tricks.

Prior to the current version of Daily Challenges since 11th December 2017, The Nameless was the quest giver. The Nameless has got replaced by the Illusionist for a rework on the beta server as an A/B test on 12th January 2022, later available for certain players on the live servers (since 8th March 2022) and since 16th May 2022 it is no longer serving as a quest giver.