Reward expansions are unlocked by researching certain technologies in the technology tree or rewarded upon the conquest of a certain provinces on the campaign map. Once unlocked players must pay coins to place those expansion. Alternatively players can pay diamonds instead.

Victory expansions can be bought for medals. Victory expansions do not have be individually unlocked and can be placed at any time provided the player has enough medals to pay for them them. Medals can be obtained from PVP tower competitions, contribution rewards from Great Buildings, from medal packages during special events, quests, Daily Challenges, Guild Expeditions, incidents and special buildings placed in the city.

There are currently 209 expansion plots in the city's buildable area, but only 187 known sources for expansions which are: 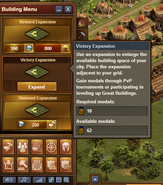 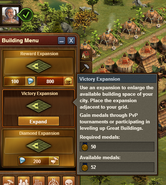 Second Victory expansion costing 50 medals.
Add a photo to this gallery
Retrieved from "https://forgeofempires.fandom.com/wiki/Expansion?oldid=101006"
Community content is available under CC-BY-SA unless otherwise noted.