The Feudal Japan Settlement is the second of the Cultural settlements, released July 10, 2019. The purpose is to lead Feudal Japan to prosperity as the Daimyo of their new village.

This page explains the workings of the settlement and it's buildings, for information about the quests, embassy advancements and rewards check the Feudal Japan page.

4500 Koban Coins. Take notice of the impediments on the city grid, unmovable rocks that block part of the grid. These cannot be removed, so it's necessary to build around the impediments, making it harder to arrange buildings. 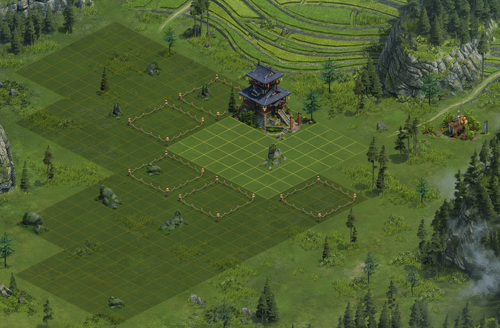 The Feudal Japan embassy has a size of

3x4 and can be moved to another location on the grid. The embassy cannot be sold. 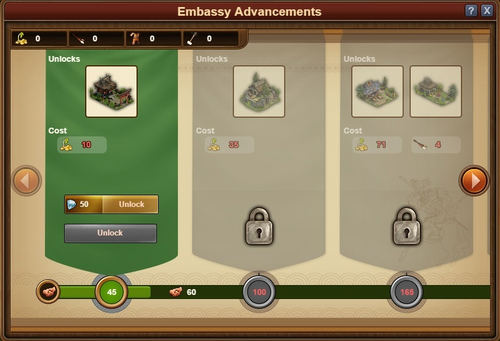 A list of all embassy advancements and their requirements can be found on the Feudal Japan page.

At the start of the settlement, the player will have one of each type of building available in the building menu: The Gasshō-zukuri Hut, the Soy Bean Field, the Tōrō and the Decorated Path. All other buildings become available by unlocking embassy advancements.

Residential buildings provide Japanese population and Koban Coins. Koban Coins are needed for the production of cultural goods. The Gasshō-zukuri Hut has three possible designs of which the game selects one randomly upon placement of the building - the other options can be seen in the Gallery.

Beware: when finishing or abandoning a settlement, all population and Koban Coins in stock will be lost.

Cultural goods buildings provide an amount of cultural goods, from 5 to 20, depending on the chosen production time. The production is similar to goods production in the main city, but requires a resource that the player gathers in the settlement: Koban Coins.
Cultural goods are used for unlocking embassy advancements and expansions.

Cultural goods buildings provide a production bonus: with each production the player has a chance of 3% to get 4x the amount of goods produced. With each finished settlement, this percentage increases by 1.5%, until 13 settlements are finished, after which it stays at 22.5%.

As an additional source of cultural goods, the Feudal Japan Settlement is the first settlement to introduce the Merchant. The Merchant allows you to acquire cultural goods by solving a negotiation using your towns regular

goods of your current and previous age,

supplies. The production bonus (4x) has the same chance to occur when getting goods from the merchant as when harvesting a cultural goods building. Also, the goods received from the merchant are counted towards any active settlement quest that requires specific goods to be collected.

Diplomacy buildings provide diplomacy, some of them also produce Koban Coins. Diplomacy is needed to unlock embassy advancements. Although diplomacy seems similar to happiness, it has no effect on the Japanese population or on settlement productions. The Tōrō and the two Torii Gates each have three possible designs of which the game selects one randomly upon placement of the building - the other options can be seen in the Gallery.

The buildings that produce Koban Coins have 6 different production options, in the following table only the 1-hour production is listed.

To expand the settlement, the player can buy 12 expansions with cultural goods. The cost of an expansion is one of the four options shown below. Example: to place the 6th expansion the player can choose between paying

There are also 3 expansions that can be unlocked with diamonds. These cost