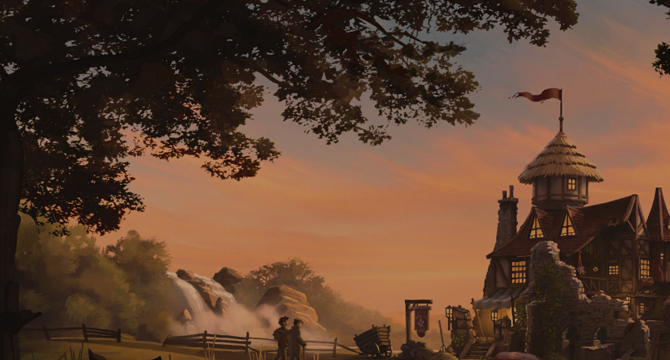 All Ages
The Friends Tavern is a special building added to the game November 23, 2016. The building is placed in the wilderness outside the city and is unlocked once the technology of Brewing is researched. The location of the Friends Tavern can not be changed.

At first it holds place for 3 friends. Every friend that visits generates a set amount of tavern silver which can be used to buy helpful boosts in the tavern shop or to improve the Friends Tavern itself to increase the silver production.

With the Update to Version 1.183 the Friends Tavern design was changed. Furthermore its position was changed from the little creek (north-west of the city) to the right side of the mountain (north of the city).

Tavern Silver is the currency used in the Friends Tavern. It has no other uses outside the tavern. To gain tavern silver friends of the player must visit the tavern, which they can do once in every

24 hours (as with aiding) if there is an open seat available. With every visiting friend the amount of silver on the table increases. Once all the seats are full no other friends are able to make the visit until the tavern owner collects the silver thus emptying the seats. Tavern silver can be collected even when all the seats are not full.

1 forge point every time they sit down at the table, depending on the level of the owner's tavern's upgrades. Visiting the taverns of friends is the second way to gain tavern silver.

Players can only visit taverns of the people in the friends list (not guild members or neighbours) by clicking on the symbol of the chair with an arrow pointing to it in the friends bar or by clicking the tavern building when visiting the friend's city.

Friends Tavern can be upgraded by either increasing the size of the table, or by adding additional chairs to the table (up to a maximum of its current size). Increasing the table size also increases the amount of tavern silver gained per visitor. Upgrading the table does not increase the seat count. Seats must be unlocked separately.

Upgrading the tray increases the amount of tavern silver the player will collect when other friends visit the tavern.

Upgrading the floor affects the amount of tavern silver the player will receive when they visit someone else's tavern. The chance of collecting tavern silver on each visit is 20%.

Upgrading the table cloth gives friends that visit the tavern a chance of finding a forge point.

There are three types of boosts that can be purchased with the tavern silver to help the city or guild in various ways.

Players can activate the maximum of 2 boosts at the same time. The first boost costs silver like shown in the table below. The second boost slot costs

50 diamonds to open and then the silver must be paid for the boost as well. Note that paying

50 diamonds does NOT open the second boost slot permanently. Players CANNOT use two boosts of the same type simultaneously (for example

+40% of coin boosts cannot be active at the same time).

Note: the minimum chairs columns in the tables are the minimum number of chairs required in order to purchase the boost; it is not the tavern's table size.

Provides coin boost which increases coin productions for the set amount of time.

Provides supply boost which increases supply productions for the set amount of time.

Grants 1 extra turn in the Guild Expeditions negotiation for the set amount of time.

Makes the population of the city enthusiastic for set amount of time, even when the demand for happiness is not reached.

Grants attack boost to the offensive army for a set amount of time.

Grants defense boost to the defending army for a set amount of time.

Grants the city a shield that prevents other players from attacking and plundering for a set amount of time.

Speeds up all construction times of buildings that are build during the time period by some percentage.

Speeds up the recruitment of units started during the time period by some percentage.