Other than the Pillory, the Gallows provides the least amount of happiness, with its 160 happiness. Its main value is the size. You can fit them most anywhere on the map with little difficulty.

A gallows (or scaffold) is a frame, typically wooden, used for execution by hanging, or as a means of torture before execution, as was used when being hanged, drawn and quartered. The gallows took its form from the Roman Furca when Constantine the Great abolished crucifixion. Thus it can be said that the gallows as punishment replaced the crucifixion of the damned. 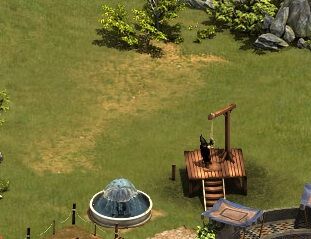 Gallows, as seen to the right by a Fountain.

Polski
Community content is available under CC-BY-SA unless otherwise noted.