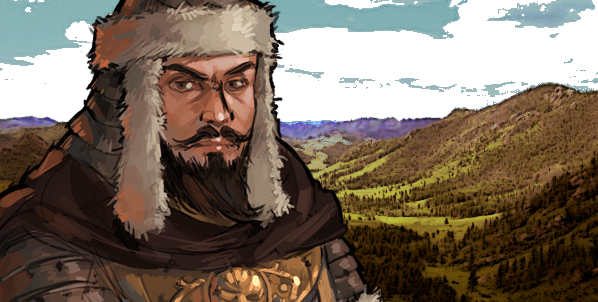 Genghis Khan is known for uniting the nomadic Mongol tribes and establishing the largest contiguous empire in history.​
Genghis Khan died in 1227. Traditional accounts say he died from falling off a horse.​ ​

The Genghis Khan Historical Questline is a historical questline that will run from October 10, 2018 to October 15, 2018. This time, as you can see, we will tell you the story of Genghis Khan, the founder of the Mongol Empire which at its peak extended from the Pacific Ocean to Central Europe.

If the player manages to complete all the quests in time, they will will receive a portrait of Genghis Khan and a new building in the Baroque Garden style, the Botanical Rotunda, which provides happiness and an attack boost.[1] As a nice additional effect, if you build it, you will be able to spot Genghis Khan himself riding his horse in your city (make sure that your animations are enabled)!