Guild Battlegrounds (GBG) is a feature which was introduced to the game by InnoGames on 14th November 2019. It is envisioned as an alternative guild feature to Guild vs Guild. It is also an attempt of bridging the gap between mobile and desktop players. However, it is not a replacement of Guild vs Guild, as both will exist side by side.

The only requirements for participating in Guild Battlegrounds are that the player must be a part of a guild and has to have researched the Military Tactics technology.

In a nutshell, all guilds who want to participate will be match-made into various battlegrounds. Each battleground is its own map that holds five to eight guilds and will last for 11 days. Within each battleground, the participating guilds will fight for victory by holding as many provinces as possible for as long as possible.

On the 9th December 2021 the Guild Battlegrounds got an update which introduced a second battleground map every second season which comes with its own set of rewards.

There are two battleground maps which will be alternating every battleground season (meaning once one map has been played the other will follow). In addition to being alternating, the map will also be the same for the entire world. The Volcano Archipelago map is the old original map, while the Waterfall Archipelago map is the new one introduced later. 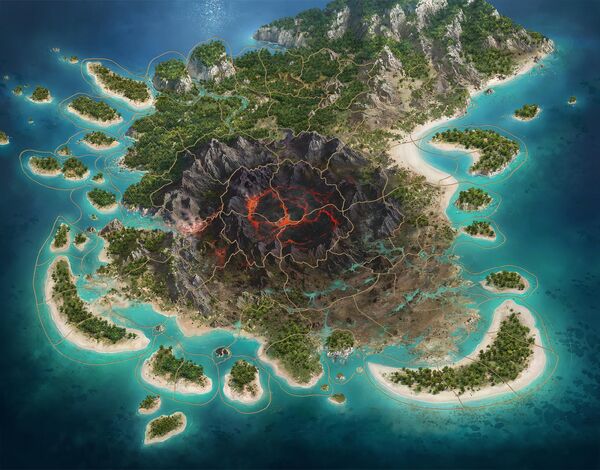 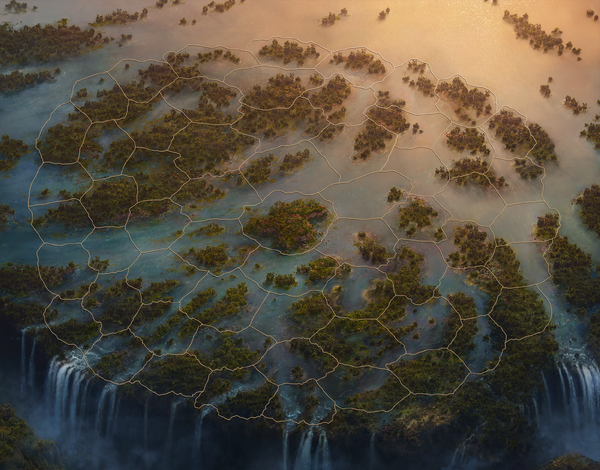 Once the player has researched the Military Tactics technology and is a part of a guild, the Guild Battlegrounds can be accessed by selecting the Battleground building located at the north-east corner of the city. The player will then be transported to an island nation, which contains a fixed number of provinces.

Five to eight guilds battle each other for 11 consecutive days. Each guild starts at the edge of the battleground map with a province, which cannot be taken from them, called the headquarter (HQ). The distance between neighboring guild headquarters will be about the same. From there, the guilds can start conquering adjacent provinces. Every guild member can click on an eligible province and either perform a fight or a negotiation. These fights and negotiations will always match the era of the player who performs it.

After completing the fight or negotiation, the member will provide his guild with one or more advances, which will be visualized as a conquest flag on the target province. The first guild to accumulate enough advances will gain control over the given province, whereas all other guilds that tried to conquer it as well will lose half the advances that they have made towards that province.

Guilds can only attack provinces which are adjacent to one of their own. With each won encounter, advances are gained. The guild with the highest amount of advances in a province will have its “conquest flag” displayed in the respective province. Other guilds having advances in a province have their shield displayed next to the conquest flag of the leading guild. The closer the guild with the highest progress is getting to conquering the province, the higher the strength of the displayed flag will be.

A province that was just taken will be under lock-down for four hours, giving the new owner some time to get victory points or build sector buildings. During lock-down, no guild can progress their conquest flag further in that province.

Any guild member can tap on a province to bring up its window. There will be two options for earning points available there - Attack and Negotiate. Both the opposing army for attacking and the goods required for negotiation will depend on the player's age (similar to Guild Expeditions). Negotiating an encounter will bring more advances than attacking as more time and resources are required for it. Attacks give 1 while solving a negotiation gives 2, therefore with low Siege Camp (SC) support negotiating might be a better option, even for fighters (with low attrition). When negotiating, you can face 4, 5 and 6 option negotiations.

The 4 or 5 options are relatively simple, but here is a table that should help others doing negotiations with the 6 option. For the first turn, you always put 5 different resources, and based on the result of the first turn, the table shows what gives the higher chance for solving the negotiation in 3 turns. Since there is no 4th turn in GBG, you have to solve the negotiation in 3 turns, so based on the result of the 2nd turn, it should be straightforward what resources you should pick. It's very likely you will have to guess, face a coin flip situation.

This table was made by the help of the FoE-Helper addon. Will plan to add the missing results, but based on a medium-size sample, these were the patterns I faced. The table is sorted by chance, and within each row the result is sorted in red-yellow-green order. You need to find the row that matches your pattern in this order.

Explanation for the colors:

The numbers represent different resources. You need to take the alignment into account, such as where do you place a specific resource, under 2 reds, or 1 red and 1 yellow!

There is no means of directly defending the acquired provinces. The only way of defending your guild's provinces will be by trying to take the provinces of the attacking guild before they take yours. In this case, if the opposing guild loses all adjacent provinces they also lose all advances that they have made towards your province.​

Upon completion of each battleground, there will be a 3-day break for the guilds to rest, collect their rewards and make new preparations. The guild score will then be updated.

The Victory Points are particularly used to measure and count the points towards the completion of the current battleground; thus they are reset at the start of every new round. Each province, besides the HQ, that a guild holds will provide victory points every hour. The magnitude of points provided by a province increases the closer it is to the center of the map.

Provinces give a certain amount of victory points per hour and the values are randomized for every battleground and every season:

Whenever a player successfully completes a battle or a negotiation (in the context of a Guild Battleground) they will build up Attrition. This is a percentage value that directly affects the (attack and defense) boosts of the defending armies and the difficulty level of the negotiations that the player will face.

So at some point, performing attacks or negotiating will become unfeasible as the defending armies become too strong and the negotiations become too complex or too expensive. However, attrition resets to 0% each day (midnight server time).

Currently, the attack penalty and the negotiation factor will stay the same after reaching level 150 attrition.

According to a guild's performance, they can climb the ladder to join the highest leagues. New guilds start off in the Copper league and can advance to Silver, Gold, Platinum and Diamond league. Upon introduction of the Guild Battlegrounds on a server, all existing guilds will get assigned to a league depending on various parameters of the guild that reflect the guilds activity.

The guild's league is dependent on the guild's League Points.

When the Guild Battlegrounds were introduced, every existing guild's League Points were roughly estimated depending on various factors like guild size, activity in Guild vs. Guild (GvG), activity in the Guild Expeditions, guild level, and so on. Hereby the League Points were intentionally estimated too low, so no guild started out in the diamond league and only a few started in platinum.

Every guild founded after the introduction of the Guild Battlegrounds will start in the copper league with 0 League Points.

After the initial League Points estimation, the League Points will only change depending on the guild's ranking in the respective battleground.

As can be seen from the League Points range for the leagues and the gains and losses of League Points for every battleground, it might take a couple seasons to rank up or down if the guild repeatedly places only slightly above or below the middle. Even when placing first or last, it might take two or three seasons before a change in league can be observed.

In the beginning there might be the case that there is only a single platinum guild and eight gold guilds. In that case, the four of the gold guilds with the most League Points will get paired with the only platinum guild in a platinum level battleground. They will receive platinum level rewards for the season and they will have higher gains and fewer risks regarding the change in League Points depending on their placement. The other four gold guilds will be paired with the silver guild with the most League Points to play in a gold level battleground. The silver guild will gain the before mentioned bonuses.

Any member with the "Battleground Constructor" role can access provinces of their own guild to decide which of the available province buildings they want to build. However, each province building takes time to complete and will cost

guild treasury goods to be constructed.

The costs depend on the building. The costs given below are the total amount of goods which is split over three random goods. The goods can be from any era represented in the guild at the start of the battleground - bronze age players hereby will be counted as iron age players. The more players are of a specific era, the more likely it is that a needed good is from that era. The respective goods and specific amounts are randomised for every building, guild, province and battleground.

The building time can be shortened by using

50 diamonds. The same building can be built multiple times per province if the province has multiple slots for province buildings.

If a province gets taken over, each province building that was being built there has a 50% chance to be destroyed. The remaining buildings will benefit the new owner.​

When a battleground ends, guilds and guild members may obtain various rewards, which depend on placement and map:

A guild needs 40 advances or more total to receive a reward.

Apart from rewards for your guild, there are also individual rewards; whenever you contribute an advancement (by fighting or negotiating), there is a chance to loot some Forge Points, Goods, a military unit or even Diamonds. This chance will be higher in case the advancement is made by negotiating. Looted Forge Points will be added to the player's Forge Points bar.

The Volcano map and the Waterfall map has the same chance to get a reward. But the chances for certain rewards and some rewards themselves is different between the maps.

The chances given below are counted occurrences so far. Note that the chances for the Loot Distribution will not add up to 100% for each league, because the 50% for the Statue of Honor Fragments are the only officially confirmed chance.

A list of FAQs regarding Guild Battlegrounds may be found here.

Every season which is played on the Waterfall Archipelago Map will have The Great Elephant and Iridescent Garden as building rewards instead of the Statue of Honor and Road to Victory.

1/5
Community content is available under CC-BY-SA unless otherwise noted.
Advertisement