Guild Perks provide an element of strategy to guild management. Basically, the guild can choose a few "Perks" from a selection available, which enhance the gameplay of the guild. However, they are only available for some time and offer both positive and negative effects, which can be both beneficial or undesirable.

The Guild Perks was first introduced on the Beta server 18 November 2021 and temporarily deactivated as of 29 December 2021 for the developers to rework the idea.

The Guild Perks come in three week cycles, and in every cycle a different choice of Perks will be offered. It is important to note that within a cycle, the perk chosen by the guild will be applicable to all the members unequivocally, so the choices have to be made wisely.

A player can only donate and benefit from a Perk if they have joined a Guild before the cycle began. If they joined after, then they will only be able to participate in the next cycle afterwards.

Donations and Unlocking the Perk[] 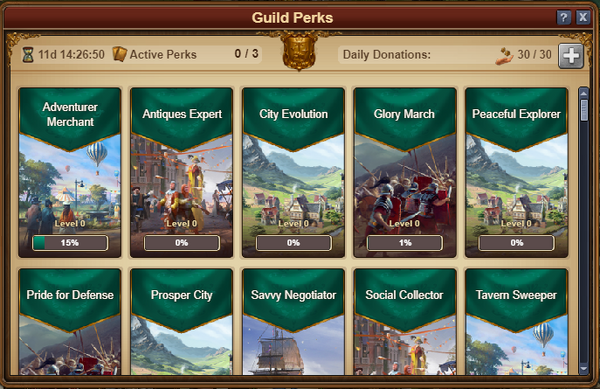 At the beginning of the three week cycle, the perks are not available as a ready-made choice. All of the cycle's 10 given perks are locked, and to unlock them the guild members will need to donate some resources. However, donating to unlock all the perks will be a wasteful expenditure of guild resources, as only a maximum of 3 perks can ultimately be selected. Therefore, proper communication needs to exist within the guild regarding the choice of perks. A Guild Leader can mark a perk as recommended, however this will not stop anyone from actually donating to all the other perks.

Now, every day each guild member can only donate a limited number of 30 donations. This cap is equally applied to all members of the guild, regardless of their rank within the guild. More

Daily Donations can be bought with diamonds: 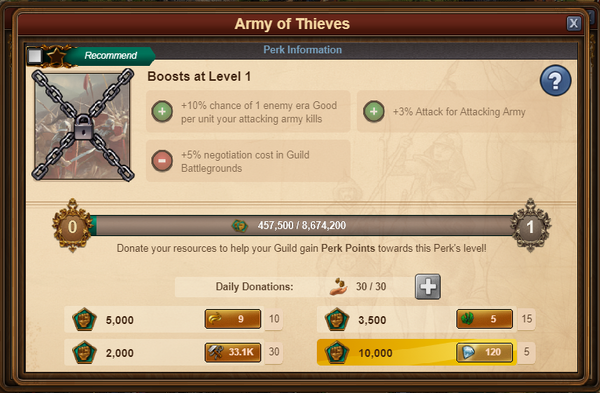 Donation Points (DPs) are needed. This is basically just a progress bar indicating the guild's progress towards unlocking that particular perk. Guild members can do some actions which will create

DPs will then count towards unlocking that perk. For each perk, the player can perform four actions - which might be a combination of paying goods, coins, supplies etc. and one premium choice which will naturally give the most amount of

DPs, and thus maximum contribution towards unlocking the perk.

DPs are not static. A very small guild might need a hundreds of thousands

DPs to unlock a perk, while a large one might need tens of millions. The amounts scale up depending on the size of the guild.

After the particular perk completes the donation level, it can be unlocked by the guild administrator. Keep in mind that even for unlocking the perk, some resources from the treasury will need to paid as a confirmation. This amount will be displayed before the donations can be made. In case the treasury is missing some of the goods required for unlocking, the guild admin can donate from their own stock pile too.

In a similar manner, the perks can also be levelled up. This will result in stronger bonuses. The mechanism for levelling up is the same as the mechanism for unlocking the perk in the first place. Keep in mind that the

DP quantities will definitely increase and the perks cannot be levelled indefinitely. There are only 3 levels. The required amount of

Donation Points for each guild member and level is in the table below.

At the end of each 3 week cycle all progress and leveling of the Perks are reset completely. So the next cycle in which the same Perk shows up there will be no advantage.

The table below lists the currently released Perks. There will be more Perks available in total counting every cycle, but the total number is unknown.