You need to have researched the Late Middle Ages technology Higher Education to unlock it.

This page explains the workings of the settlement and its buildings; for information about the quests, embassy advancements and rewards check the Mughal Empire page.

When starting the Mughal Empire Settlement the player will have a city grid the size of 11 expansions (roughly 4x3), with the Mughal embassy in the middle back, and a stock of

6,200 Rupees. Take notice of the impediments on the city grid outside of the starting area - unmovable rocks that block part of the grid. These can be removed, using removal tools as far as they are available - otherwise it is necessary to build around the impediments, making it harder to arrange buildings. 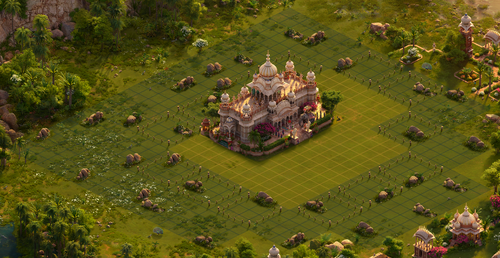 The Mughal Empire embassy has a size of

9x6 and can be moved to another location on the grid. The embassy cannot be sold.

800 Rupees per day. For each different production Diplomacy Buildings attached to the embassy, the embassy additionally produces 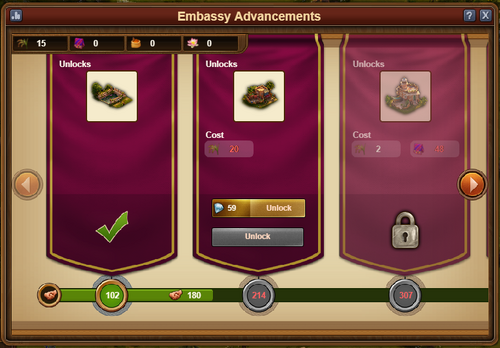 A list of all embassy advancements and their requirements can be found on the Mughal Empire page.

The Mughal Empire Settlement is the first settlement with a chain and set mechanic inside the settlement, making the whole settlement the puzzle and also the minigame you have to solve. Meaning thinking about which expansions to buy and which impediments to remove gets crucial for success.

The non-production Diplomacy Buildings, have a

chain ability with the Embassy, which means that you can attach them to your Embassy entrances. When you connect these buildings correctly to the Embassy, you increase the overall amount of diplomacy in your settlement. You can either attach Alleys to the front Embassy stairs or Water Canals to the side Embassy entrances.

Meanwhile, the production Diplomacy Buildings have a

set ability with the Embassy, meaning that you can collect additional cultural goods once a day by placing the unique buildings Chhatri, Baldachin and Charbagh anywhere close to the Embassy.

The Production Bonus (4x) has the same chance to occur when collecting from the Embassy as when harvesting a cultural goods building. The production bonus is working for both the Rupees and eventual Cultural Goods recieved from having a set bonus.

At the start of the settlement, the player will have one of each type of building available in the building menu: the Bhavan, the Rice Paddy, the Alley and the Groomed Path. All other buildings become available by unlocking embassy advancements.

The building cost of each settlement building depends on the player's era and consists of resources from the main city:

supplies, except from the roads which requires

All resources gained from the settlement stay there. Players cannot trade cultural goods with other players.

Rupees. Rupees are needed for the production of cultural goods. The Bhavan has three possible designs and the Shanti Ghar has two possible designs of which the game selects one randomly upon placement of the building - the other options can be seen in the Gallery.

Beware: when finishing or abandoning a settlement, all population and Rupees in stock will be lost.

Cultural goods buildings provide an amount of cultural goods, from 5 to 20, depending on the chosen production time. The production is similar to goods production in the main city, but requires a resource that the player gathers in the settlement:

Cultural goods buildings provide a production bonus: with each production the player has a chance of 3% to get 4x the amount of goods produced. With each finished settlement, this percentage increases by 4% for the second settlement and by 2% for each settlement after. Until 10 settlements are finished, after which it stays at 25%.

Diplomacy buildings provide diplomacy, some of them also produce

Rupees. Diplomacy is needed to unlock embassy advancements. Although diplomacy seems similar to happiness, it has no effect on the Mughal population or on settlement productions. The Alley, the Water Canal and the Chhatri each have two possible designs of which the game selects one randomly upon placement of the building - the other options can be seen in the Gallery.

The buildings that produce Rupees have 6 different production options, in the following table all productions are listed.

All diplomacy buildings has either a chain or set mechanic with the Embassy for added bonuses.

Chain Ability Bonus
The Alley and the Water Canal has a chain mechanic with the Embassy. It means you can attach these cultural buildings to your Embassy entrances to increase the overall amount of

diplomacy in your settlement. Any Alleys or Water Canals built outside a chain will only give the basic amount of diplomacy. The following table list the extra bonus you get for each connected building in a chain and the amounts are additional. There is no limit on the length of added bonuses to the chains as long as you have available settlement space cleared from eventual Impediments in the way.

Set Ability Bonus
The Chhatri, the Baldachin and the Charbagh has a set mechanic with the Embassy. It means you can collect additional

Cultural Goods once a day by placing these buildings anywhere right next to the Embassy. You can get up to 3 set bonuses, but these are only granted when placing unique set buildings. The amounts of these set bonuses are listed in the following table and the bonuses are additional. The cultural goods will be added to the harvest of the Embassy and each collection will reward only one of the four type of goods. Which type for each collection is random.

All settlement buildings except the non-production diplomacy buildings require a road connection to the embassy.

To expand the settlement, the player can buy 23 expansions with cultural goods. The cost of an expansion is one of the four options shown below. Example: to place the 8th expansion the player can choose between paying

The Mughal Empire is the third settlement to use the impediment removal tools. 6

free removal tools can be gained from solving quests in the settlement. Additionally, 6 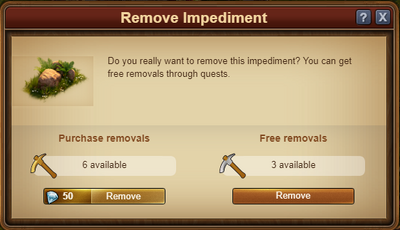