The Piazza Set is a building set released in the 2019 Carnival Event. The set consists of five buildings which all can be earned during the event from the special and league rewards.

Each building has increased properties while placed next to another buildings from the same set. The buildings that belong to the set are identifiable by the Mask icon. Which is displayed in the players inventory next to the buildings picture. 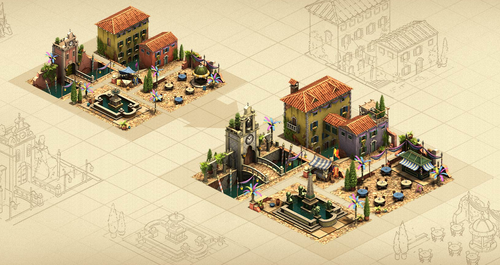 The set also has a level 2 version. Each of the buildings has an individual upgrade kit available from the Piazza Selection Kit which allows players to choose an upgrade to any of the existing set building or build a new level 1 version of any one of the buildings. Each building has new visuals and improved properties after the upgrade.

The Piazza Set consists of five buildings. Each of the buildings can be upgraded once.