**Note: This changelog is separated from bugfixed and new features, see Changelog 1.0

The skill is used by the High Middle Age Knights and Late Middle Age Heavy Knights (with Chivalry values of 3 and 5 respectively). The skill increases attack and defense when this is the only unit with chivalry in the army.

This is a "reactive" skill, that may either kick in when a player loses one of their knight in battle (then the last knight will get the activated bonus) or be active from the start (if the player only brings one chivalrous unit to battle).

A random loading screen will be displayed each time you log into Forge of Empires. There are also some tips and hints shown on the screen. 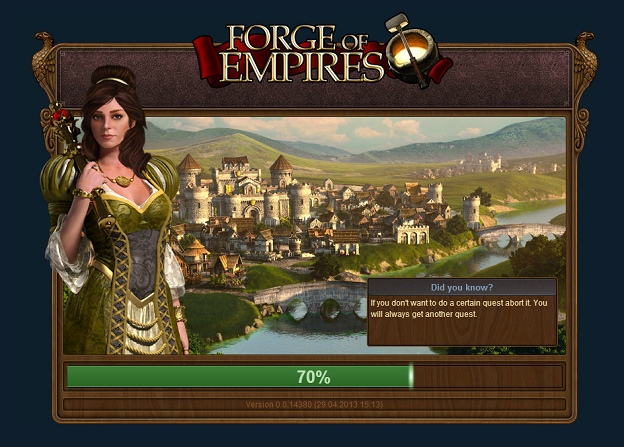 Old quests from the storyline and bonus content have been reworked with new success conditions. Most of the changes were done for the Late Middle Ages bonus content (including the notorious Swords and Sorcery quest). All the quests that had strictly LMA-connected requirements now either have a different success condition or an alternative that can be done using Colonial Age means.

Please note that completed quests are not affected, but active/future quests will have the new requirements.

Information about exactly which quests have changed and how is in below.

*After unlocking the technology “colonies” the player has to have 9 rangers rather than library and academy.

Some unit stats have been changed. Below is a list of units' changes

Retrieved from "https://forgeofempires.fandom.com/wiki/Version_1.0?oldid=126979"
Community content is available under CC-BY-SA unless otherwise noted.