The Warrior is the heavy unit of Bronze Age. It has a relatively high defense, moderate attack, and low movement points. It receives a defense bonus when standing on plains and against light units. As a heavy unit, it also gains a bonus 3 damage against light units, such as Spearfighters.

The Warrior can be considered the "tank" unit in the Bronze Age. It generally works well against other melee classes. However, both ranged units and artillery units have a combat bonus against it. Combined with a rather slow speed, the Warrior is quite vulnerable to those classes. As with all units, it's best to field with other units to ease their weakness. Slingers do not do as much damage against warriors compared to other ranged units in other ages against same unit heavy units, making the warrior just a bit stronger. The Stone Thrower, the artillery unit of the Bronze Age, is not very effective against the Warrior.

The warrior is much weaker against same age units compared to other heavy units of different ages. Multiple spearfighters can gang up on a warrior and kill it with a few hits. Warriors have a moderately low attack, and are only effective against spearfighters and horsemen.

Warriors are not recommended by the time a player reaches the middle of the Iron Age because they greatly lose their effectiveness. Soldiers are superior to them in every way except for defense and the bonus against light units. Using the Warrior beyond the Iron Age is a big mistake, as the Mercenary (the light unit of the EMA) can often kill the warrior in two hits. By (or before) a player reaches the Early Middle Ages, it's a good idea to replace Warriors with Legionnaires.

This is an interesting matchup, as neither unit has attack or defense against the other. However, in the absence of Spearfighters, Warriors can hold their own against the Horseman. Warriors should focus on Spearfighters before attacking any Horseman.

The Slinger is the greatest threat to the Warrior. With an attack and defense bonus against Warriors, Slingers can do a lot of damage to Warriors if used correctly. Warriors are slow, and cannot easily catch up to Slingers, who can hit Warriors and be safe from retaliation. Players should use the Horseman or Spearfighters to take out any Slingers before they hit the Warrior.

The Stone Thrower is a second choice for attacking Warriors. With their long range, Warriors will take many turns to reach a Stone Thrower, allowing it to slowly do damage and wear them down. Any Stone Throwers that players may encounter will usually attack the ranged units that the player uses. Meanwhile, if Warriors manage to attack Stone Throwers, it will generally take a few attacks to kill one, as Stone Throwers have a defense against heavy units.

In the Late Bronze Age, a new formation called the Phalanx created new warriors on the battlefield. A phalanx is a formation where lines of warriors would form a shield wall with spears facing forwards, where each man relied on each other for protection.

The Warrior's wears a helmet of bronze with a blue tunic and a purple cape, he is carrying a wooden shield rimmed with bronze, and has a long spear type weapon for attacking. 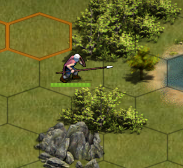 Retrieved from "https://forgeofempires.fandom.com/wiki/Warrior?oldid=125415"
Community content is available under CC-BY-SA unless otherwise noted.